I had started playing Crusader Kings II again and like every other time before it, I always get to the point when I want to mess up with my ruler, i.e. cheat a bit. And by a bit, I mean a whole lot. Nothing short of the most over powered ruler possible is acceptable. Even though the game provides all the in-game cheat commands necessary to achieve this, it is not as easy as one may think. You can easily set the age of any character and change their stats, but their traits need to be added one by one. The list of good and bad traits is a long one, and you have to do a bit of searching for it on the web or by finding the right plain-text file in the game configuration folder that defines these traits (and then making sure you only add the good ones). This is further complicated if you happen to use any of the popular mods for CKII (e.g. Lux Invicta) that more than doubles the list of ruler traits. Furthermore, the cheat command requires you to input the ID of the trait, not its display name in game. For the vanilla game, I think these two values coincide most of the time, but that is certainly not the case for mods. There are plenty of situations where the ID of the trait is either a synonym word for it or worse, a misspelling. So there is no escape, you have to find the configuration files that define the traits for every mod and dig in. There must be a better way!

Well, the game has this wonderful DLC called Ruler Designer that allows you to customize your ruler when setting up your game, which undoubtedly adds more flavor to the game and can be an excellent tool for role playing purposes. I, and many others, do not consider this designer feature a cheating tool. Every stat and trait has an associated “age” cost and your configuration cannot go above the age of 50. This means you cannot go about creating an overpowered ruler as you always have to counter balance buffed up stats and good traits with a set of bad traits to lower the age. While this is fun and great, it doesn’t help me with creating the most OP ruler ever known to man. Not without a little bit of hacking. If we could just somehow get rid of the age cost, creating an OP ruler via the Ruler Designer is so much simpler than using cheat commands and digging through configuration files, because everything you need is on your screen and you can just select what you want. This is how the ruler designer looks like on the attributes panel. 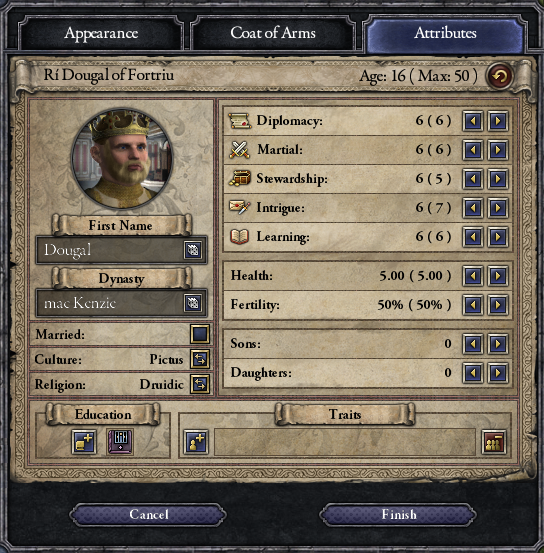 The Ruler Designer in Crusader Kings 2

The list of traits clearly displays the age cost. If I were to pick the Genius trait in Figure 2, my age would increase by 30. If I were to pick Genius plus Attractive, I would be 16+30+16=62 years old, 12 years above the maximum 50 so I wouldn’t be able to create that ruler. I would need to pick some bad traits already to decrease the age, and I have only picked up 2 good traits so far!

In these situations I usually use any random memory hacker to open the CKII process, scan the memory for the value that I am looking for and modify it. For example, here I would search for the value 16 which would yield an insane amount of results, then I would narrow the results by modifying a stat or picking up an ability that modifies the age, and then I would search again for the new value from the result list, rinse and repeat until I narrow it down to 1-2 memory addresses. Then I just modify that value to set the age that I want. Sometimes the value you are looking for is not a 4-byte integer, it may be smaller or bigger, a decimal or floating point number (where decimals might be truncated). Sometimes it’s not the wrong data type you’re searching for, but the value itself. For example, age may be computed and stored in months, but a conversion function is used to display it in years.

Unfortunately, it is not that simple here. That value, the age, is never stored in memory (or not persistently; it is computed, displayed, and then forgotten), so searching the memory for it doesn’t yield any result. And even if it were, this scenario is a little more complicated than that as there is a “Finish” button you can see in the screenshots above, which gets grayed out when age goes above 50. Finding and modifying the age may not un-gray that button. This means we have to do a bit of debugging here: search for a starting point, set some breakpoints, disassemble the code and figure out how we can modify stats and traits without changing the age. You can pretty much use any debugger for this, but there are a few simple ones written specifically for game cheating such as T-Search or Cheat Engine. I will be using the latter.

The plan of attack:

We found the memory address where the Diplomacy value is stored

cmp ebx,eax <- this compares the calculated age with 16

jnge CK2game.SDL_GetNumAudioDrivers+2A564D <- if the calculated age is smaller than 16, this instruction jumps below and the function exits returning age 16.

mov eax, ebx <- if the calculated age is not smaller than 16, this instruction is executed and stores the age in EAX

The rest of the instructions deal with correctly exiting the function and returning the value of EAX, which is either 16 or the calculated age.

We end up with a function that goes over all the stats and traits and computes the value for the age, but it always returns 16 at the end. This function is used by user interface to display the age number, to display your portrait based on age, and to let you click on the Finish button. After the change above, I could do this in my designer and the age remains at 16:

Overpowered character with insane stats and traits at age 16

Since this part of the function is unlikely to change with game updates, you can right away just search for those opcodes plus bytes I just NOP-ed out and do it again. I believe Cheat Engine allows you to write a very small and simple LUA script to do that, so next time you fire up the game and cheat engine, you just execute the script and be done with it. Similarly, you can write a small program (a trainer) that does the same thing.

Well, now, back to my game of conquering the Scottish Highlands, driving out the Norse, uniting Scotland and educating the “English” in speaking proper Gaelic 🙂

[UPDATE] To summarize, you can achieve this by following these two steps:

Recent Posts: What the what?!